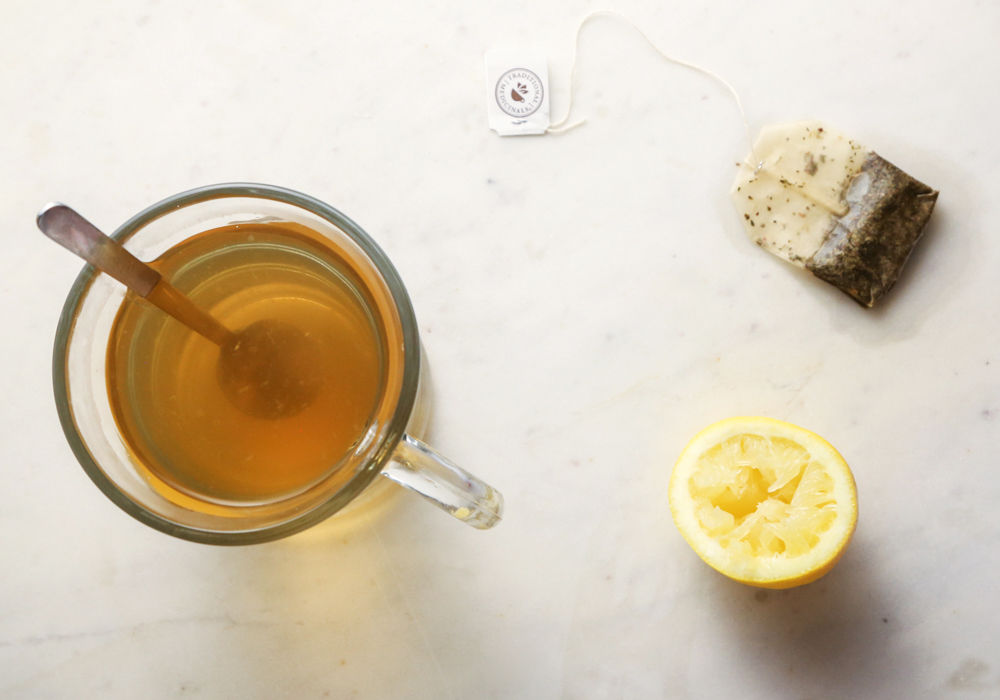 Snowed in? Now is the time for a beloved warm cocktail: The Hot Toddy! While chances are the whiskey-and-lemon laden drink can’t cure the common cold, it can at least warm you up. Below, you’ll find a few hot toddy cocktails designed to relieve your winter sorrows, as well as an exploration of what hot toddies are and their lineage in the history of cocktails.

Boil water for tea, and steep. While tea steeps, mix ingredients in a heatproof mug or cup. Pour steeped mint tea over the ingredients into the cup. Stir to combine. Garnish with lemon peel and candied ginger.

Now that you’ve settled in with a beverage, we can talk about that strangely named cocktail. Stories abound around the hot toddy, from a Todd’s well in Scotland to being the drink of choice for Civil War soldiers. As much as we enjoy a good story, at KOVAL we seek to go beyond mythos and lore. Often, when a history appears murky, the culprit isn’t the lost memory of time, but rather our own mysterious turning away from details we don’t want to know. Colonialism typically goes overlooked when looking into the history of cocktails. Yet mixology as we know it today is what it is because of that history. Bars all over the world owe a debt to colonized cultures. So, when in doubt about the origins of a cocktail—for example, the hot toddy—look behind the curtain.

Although many different tales surround the “toddy” name, the least mystical and most likely source material is an appropriative attempt to refashion what foreign peoples had created from halfway round the globe, not early Americans or even cold Scotsmen thirsting for warm whisk(e)y. The first use of the anglicized version of the Hindi word, tārī, occurred in 1602, referring to the base material from which a spirit called “arrack” could be made. However, the word arrack itself came to Asia through trade with Arabic speakers, for whom it meant a sweet liquor. So really, “arrack” encompassed many liquors from several cultures, all of which predate New World spirits. To the European colonizer first encountering arrack, these spirits that were distilled from “toddy” (ie, tārī, a palm wine) became as popular as any raw material they sought.

An immense appetite was born for the spirit, and colonizers started sending arrack back to Europe from places like India, Sri Lanka, Java, and the Philippines. Powerful European trade companies resorted to producing something akin to arrack wherever their colonists lived. But it wasn’t enough.

“Considered superior to Caribbean rum, arrack was a higher-priced option for tavern-goers whose preferred drink at the time was punch. Punch was introduced from India to Britain, during the late 1500s, by sailors who were enamoured with its remarkable flavour and its base spirit… Arrack was the drink of those who could afford better than the basics.”

Thus came New World spirits that would become known as cachaça, rum, and other distillates that were cheaper to acquire and to ship. And most of those producers—the people actually cultivating the sugarcane, grains, etc.—did not have any choice in the matter.

Nearly three centuries later, a cold cocktail of similar color and sweetness had been created by the earliest mixologists. They had to make something new—transport and trade of arrack was banned and/or taxed such that only the richest buyers could acquire spirits made outside of their own empire—British, French, or otherwise.  (Thankfully, the slave trade that forced people into producing arrack-like New World spirits had finally come to an end as well.) Whatever base spirit—applejack, brandy, or whiskey—the cocktail included lemon juice and sugar, giving it a yellowish, arrack-like appearance.

According to “the only William” Schmidt’s book The Flowing Bowl (1892), tārī is “the sugary juice of the blossoms of the cocoa palm-tree,” used “in the East and West Indies” to make the spirit called arrack. However, William and other bartenders spelled the word as “toddy.” (Fun Fact: William Schmidt was a famed German bartender during the late nineteenth century with encyclopedic-like knowledge of his craft. When he immigrated to the United States, he spent his first 15 years here bartending in Chicago, making an array of cocktail variations.)

Sometime after the heyday of Schmidt and his cohort of mixologists, the toddy transitioned away from being served as a cold tropical punch, well ahead of the boom of the romanticized tiki bar. One of the earliest versions of a hot toddy cocktail comes from Here’s How!, the anonymously published cocktail book from the days of Prohibition. The author claims to include the recipe specifically “for Grandma and Grandpa,” as though the hot toddy was already antiquated in 1927. Perhaps it was at this point that the hot toddy took on the warm, medicinal connotation that twenty-first century imbibers now know. In any case, following the warfare of WWII in the Pacific, production of arrack was nearly completely destroyed, and the original “toddy” spirit was all but forgotten.

In order to step into a new year, we need to know the past from whence we came. At KOVAL, we believe in transparency and honesty. That goes for the organic, locally-sourced ingredients that become our spirits as well as for the stories we tell. While we chart our own path as an independent, grain-to-bottle craft distillery, we seek to properly acknowledge our predecessors that made such a path possible—all of those predecessors. So, on this frigid January day, we invite you to join us with a KOVAL Hot Toddy, toasting to distillers from southeast Asia whose creativity inspired this cocktail centuries later.

Boil water. While waiting for water to boil, pour ingredients into heatproof mug or cup. Once water is hot, add to the mix and stir thoroughly. Garnish with lemon wheel.

If you have KOVAL Millet Single Barrel Whiskey available in your area, give it a try in the place of Rye or Bourbon!